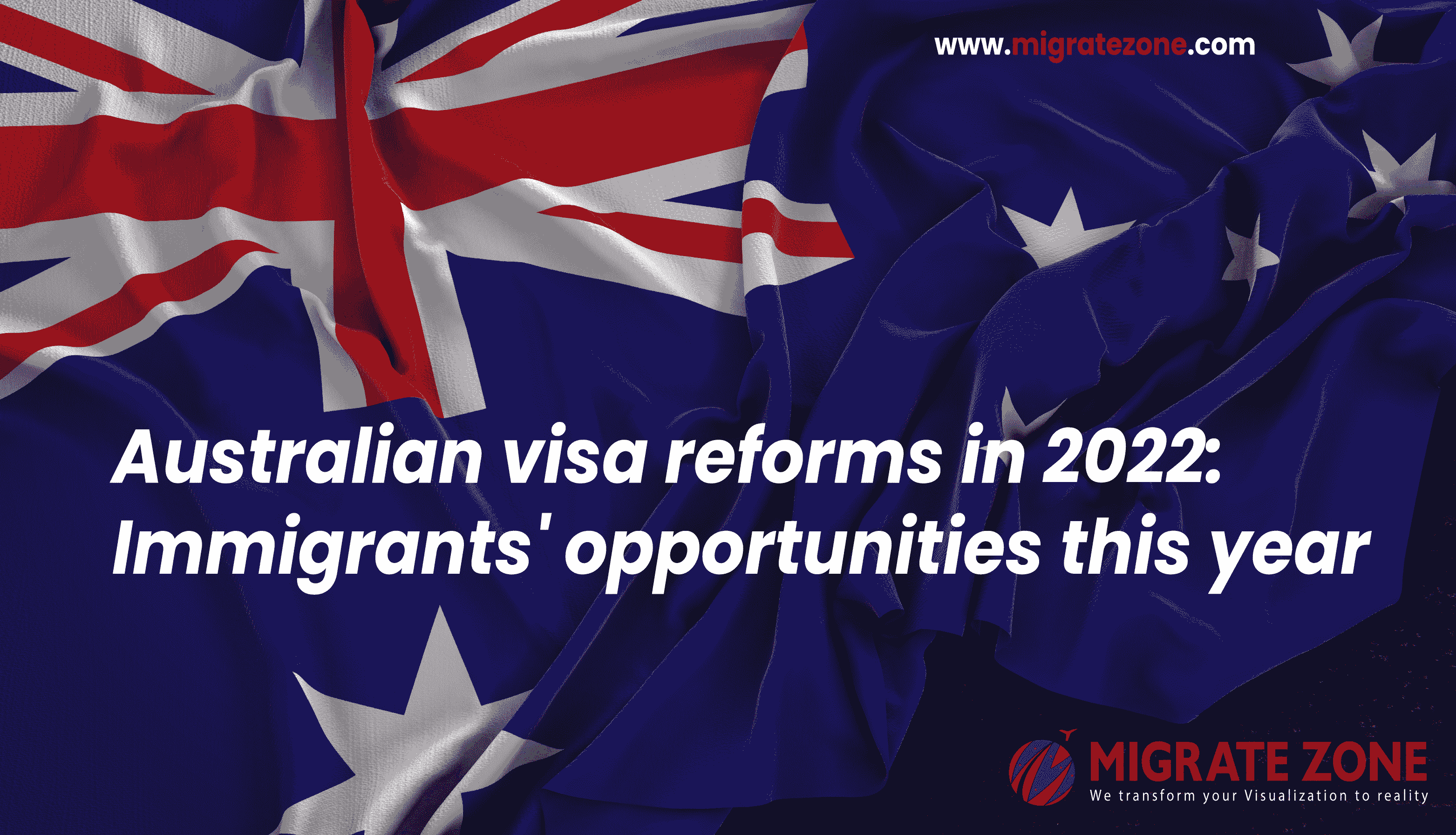 June's most recent updates on Australian immigration If you are applying for an Australian visa this year, you need to be aware of the necessary steps and any new regulations. Australia has a very simple point-based immigration system that grants permanent residency to qualified and talented foreigners.

In recent months, the Australian government has made a number of significant adjustments to visa rules and application processes. Anyone applying for an Australian visa this year must take note of these changes.

Because of numerous travel bans and border closures, migration to Australia has sharply decreased since the start of the COVID-19 pandemic, but it is anticipated to increase again in 2022.

Australia's immigration policy is established annually and is in effect from July 1 through June 30 of each fiscal year. The predicted population for 2024–25 is still 235,000.

Who can currently enter Australia with a visa?

Australian citizens and permanent residents are also permitted entry, and they can apply for an exemption to allow their immediate families to join them.

More opportunities for those with temporary visas

Due to a lack of employment opportunities and welfare assistance, many temporary visa holders left Australia during the pandemic. However, Ben Watt, a migration lawyer for Visa Envoy, predicted that now the focus will be on giving those who stayed pathways to permanent residency, with some of those pathways having already been announced.

According to me, they're trying to recruit those permanent migrants from people who are already living in Australia, so [the Department of Home Affairs] appears to want to fill that 160,000 with a significant number of people who are currently in the country on those temporary visas, he said.

"That's the big change; they're loosening up and offering many different pathways and extensions for people who are already here to fulfil their immigration dream."

The government has already made a number of visa changes in response to the pandemic, and it will keep doing so in order to support Australia's economic recovery, according to a Department of Home Affairs spokesperson.

For skilled immigrants in the medical and hospitality fields, permanent residency :

As part of its economic recovery, the government announced significant visa changes in November to keep highly skilled migrants in vital industries. Certain immigrants who decided to remain and work in Australia during the pandemic will be qualified for permanent residency under the new rules.

The modifications may be advantageous to current holders of Temporary Skill Shortage (subclass 482) visas in the short-term stream, who were formerly limited to a two-year stay in the absence of such a pathway. Benefits may also apply to Temporary Work Skilled (subclass 457) visa holders who no longer meet the age requirement.

This is a special concession meant to honour the highly skilled foreign workers who made the decision to remain in Australia throughout the pandemic while also addressing the country's severe labour shortages. According to then-Immigration Minister Alex Hawke, this enables them to remain in Australia and provides a path toward obtaining Australian citizenship.

About 20,000 visa holders, mostly working in the health and hospitality sectors, according to Mr Hawke, may benefit from the changes.

According to Mr Watt, the changes will significantly benefit people who have struggled to obtain permanent residency while living and working in major cities in certain hospitality jobs.

I've always had a lot of cooks and restaurant managers who come in, work for a restaurant or businesses in Sydney, Brisbane, and Melbourne, and have the ability to really contribute, as long as I've worked in the industry.

These people have had a bitter pill to swallow because, despite being in great need, they are unable to obtain permanent residency due to the shortage of workers in their field.

It puts an end to the cruelty in that circumstance and gives more people a strong incentive to follow that course. The department spokesperson stated that the changes will be implemented gradually beginning in December 2021 and continuing through July 1, 2022.

The temporary migrants who were left stranded abroad due to the pandemic, according to the managing director of the Australian Immigration Agency Ruby Fowdar, have been the hardest hit. However, visa holders are in a "good position" in Australia.

The skilled regional subclass 191 visa, which is available to those who have previously held an eligible visa and who have lived, worked or studied in a designated regional area, was one of the new permanent residency pathways she highlighted.

The department states that the visa won't begin until 16 November 2022.

Additionally, some Australian-based Hong Kong nationals will have access to new, specialised pathways to permanent residency beginning in March 2022, which is good news for them.

According to the government, the introduction of two new visa streams, subclasses 189 (Hong Kong Skilled Independent Stream) and 191 (Hong Kong Regional Stream), was a part of Australia's commitment to forging closer ties with Hong Kong.

These new visas will give temporary graduates and temporary skilled workers from Hong Kong who are currently in Australia on extended visas a path to permanent residency, according to Mr Hawke, and they "will build on the already strong family ties and economic ties with Hong Kong that have existed for many years."

On March 5, 2022, two new visa streams will become available, and it is anticipated that about 8,800 current temporary skilled, graduate, and student visa holders will be eligible.

In order to assist eligible temporary visa holders who are New Zealand citizens in obtaining permanent residency in Australia, the Australian government modified the New Zealand pathway in 2021.

According to Mr Watt, if a New Zealander lives in Australia and earns a certain amount of money, they may be eligible for an 189 place that would otherwise go to a skilled immigrant from abroad.

Changes to the New Zealand stream of the Skilled Independent (Subclass 189) visa went into effect on July 1, 2021, reducing the number of years that an eligible applicant must meet the required income threshold (from at least four to three of the last five income years).

Additionally, the government has taken steps to ensure that temporary visa holders who had been moving toward permanent residency before COVID-19 maintain their eligibility.

As of November 13, 2021, New Zealand citizens applying for the New Zealand stream of the Skilled Independent (subclass 189) visa will no longer be subject to the income requirement for the 2020–21 income year.

This will help candidates whose income for 2020–21 was negatively impacted by the COVID–19 pandemic. The 2019–20 or 2020–21 income year may be used for applicants' COVID–19 income exemption claims, but not both.

Three skilled migration visa subclasses are now temporarily available for onshore applications to skilled migrants in Australia as a result of a change to section 48 of the Migration Act.

Applicants who have had a visa denied or revoked since their most recent entry into Australia are subject to the Section 48 bar.

The following visa subclasses: 491, 494, and 190, were temporarily added to the list of exempt visas by Mr Hawke on November 13.

There is a large pool of candidates who were previously ineligible for the position, so it is a big opening.

"That's in place right now, but it'll have an impact on things next year."

The modification only takes effect during the current COVID-19 emergency, according to a department spokesperson.

Once this time period is over, they added, "The additional subclasses will be  removed from the list of exempt visas."

There is a wait for temporary graduate visa holders who are stuck abroad and unable to travel to Australia due to the pandemic to apply for a replacement visa.

The concession, according to the government's announcement in November, will allow temporary graduate (subclass 485) visa holders, both current and former, whose visas expired on or after 1 February 2020, to reapply for a new visa with the same duration beginning 1 July 2022.

The 485 visas are provided to recently graduated foreign students who possess the necessary skills for particular occupations in order to enable them to continue working in Australia.

The duration of stay on a 485 visa has been extended from two to three years for graduates of Masters by Coursework programmes and from eighteen to twenty-four months for Graduate Work stream graduates.

The variety of concessions already announced, according to Mr Watt, are complex but worthwhile investigating "as they are trying to do a little justice for these people.

A lot of the talent that was here has a chance to return, which is a very humane concession.

There are a huge number of various scenarios and changes, and who is eligible for what depends on who applies. However, this will probably be the first thing to go if there is another border closure.

According to the government, these adjustments would be made "gradually" between December 1, 2021, and July 1, 2022. Additional information is anticipated on the department's website. Beginning on July 1, 2022, people can apply for a replacement visa.